September 22 was a banner day throughout China. It marks China’s first participation in the International No Car Day where everyone is supposed to leave their car at home. China ordered 108 cities here to ban cars and use only public transport. This is a big deal for modern China to do. First, there are more cars being produced in China than anywhere in the world. The Chinese in just recent years have become the largest consumers of cars. It is a sign of wealth and success to throw away the bike and buy a car. The sad fact is that the Chinese have little idea how to actually use cars. They still think bike rules apply for driving a car. As a result, China has the highest fatality rate in the world through car accidents. Last year over 100,000 deaths attributed to car accidents here. Couple this with the explosive growth rate of car ownership in China, and this will only get worse.Kunming is a city about the same size as Seattle metro area. Seattle has about 1 million people and typical major car congestion problems. Kunming has over 5 million people AND over 400 new cars a day are added to it’s streets! You can see the problems with cars here are out of control compared to Seattle. Beijing is adding 1000 new cars a day to their city. Growth like this is not found anywhere else in the world. Needless to say, driving in China is both dangerous and not at all pleasant. My car generally stays in the garage unless we are going out of town. I use my moto everywhere, which is fast and easy.So today all cars were banned from Kunming. I went into town and still found the streets very busy, but nothing like it normally is here. The only thing driving was the busses and taxi’s. It was strange to see the roads full of only taxi’s everywhere. You should see the video I did. I still can’t believe how many taxi’s there are in Kunming!

Kunming newspaper Dushi Shibao is reporting that beginning on the 27th of this month, “Kunming will be the first city in China to have monthly ‘No-car days'”. After this month, private cars will be banned from entering the city’s ring road between the hours of 9:00 am and 7:00 pm on the fourth Saturday of each month.

On September 22 Kunming was one of more than 100 Chinese cities to ban private cars downtown during the day. For twelve hours, downtown Kunming’s streets were primarily occupied by buses, taxis, electric scooters and bicycles. The city’s effort was one of the most successful in the country, while Beijing and Shanghai’s no-car days received lukewarm reviews. 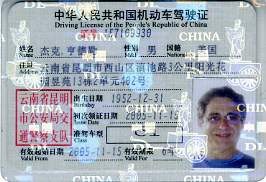 Yesterday morning it was off to the Chinese drivers license office for my test. They handed me a 100 question test in English for God’s sake! Of course I only had a Chinese book to study, but what the hell. Anyway, I take this test with questions like…”When traveling in a primary car on a road unmarked by signs, you can….A. raise your speed to fit the road. B. lower your speed and watch for cows……..C. remain seated and alert. Hmmmm. what the hell do they want here?????? Let’s not forget showing a picture of a Chinese sign and I have 3 choices to know what it says!!! Somehow I managed to get an 83 on the test. I was feeling quite proud of myself until they informed me that I failed! I need a 90 or better to pass. I took the test again, and got a 95! Go figure. So now I am the proud owner of a Chinese drivers license. COOL!!!!
So I drove around a little, dodging horse carts, bicycles, people, dogs, motorcycles, cars, small animals and cows… all normal in the downtown section. You can imagine what happens outside of downtown! There are things being pulled, pushed, dragged and generally just lying around all over the place! Makes driving here a real eye opener! Pictures to follow later! Thats it for now………………..

First I had to go to the hospital and get a “medical check up”. So this morning I go there and see three doctors. The first one has me read an eye chart, but of course she could not understand my answers. This made it a confusing process. Not to mention I don’t read Chinese characters! But soon with paper and pen, I convinced her I can see.  Then off the check my muscles. This was accomplished by me simply making a fist and opening my hand. I also had to stand up from sitting in a chair. DUH! Now I passed this test. Last was a hearing test. I go into another office and a women says something to me in Chinese. I answer…. “What?”.  Ok done, I heard her talking so I passed this test. This medical check up set me back $1.50.  Now the real fun begins…….
This afternoon I go to the police station where I will take my written test. A week ago they gave me a book about 1″ thick containing all the driving rules. Naturally it is all in Chinese as they do not have another language available. So I look at the pics of the traffic signs and I assume I have these figured out ok. Nonetheless, now I will get a written test. And true to form this will also be written in Chinese. I cannot have another person transulate for me, so I suppose I will just pick A,B,C,or D and hope for the best. But assuming I pass this test,  I will then be able to drive here. I have to wait until after lucnch this afternoon (12:00-2:00) and take this test. Wish me luck,  I will keep you posted………………………