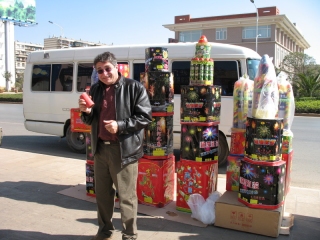 Happy New Year! I survived MY FIRST Chinese New Year! This is something like you cannot imagine. The Chinese take their fireworks VERY seriously here. Saturday (1/28) I walked around outside my condo. Fireworks stands are everywhere. And by now the streets are completely covered with spent fireworks that have been lit for the past several days. But today is only hours away from New Years, and people are consuming explosives like they are ready for war. P could not resist a few of these little buggers. They cost about 50 cents each. Basically it is a 4” pipe bomb. When I set this baby off, the pressure wave at 50 ft. was VERY noticeable. Need I mention the “report”? Let’s just say it got your attention. I won’t mess with this one again.Walking around and watching the art of fireworks sales was interesting. Cases of explosives stacked 8 ft high over every sidewalk you walked on. Tables strewn with open boxes and the sellers all with cigarettes in their mouths. Occasionally they would pick up a firework from the table, light it with their cigarette and throw it in the street from behind their table. Hundreds of pounds of fireworks only inches away! Apparently safety is not a word in China!

Night fell on Kunming and I ventured outside to see the action. People are everywhere in the street shooting fireworks. You can shoot anything, anywhere you want. Rockets coming out of 10 story condos, thousands of people in the street with huge bags of fireworks. I’m talking everything from 5” artillery shells like the ones used in the big shows in America, to 5,000 strings of M-80’s 15 ft long. All being thrown and hung from buildings. The air is solid fog from all the smoke. I can’t describe the noise! The entire city is out in the streets shooting fireworks. Non stop chaos everywhere, and it is only 8pm! At 12pm, all hell broke loose. It is like standing on the barge at the Ivars show on every street in Kunming. This went on non stop all night. It is now 10am and I sit here STILL watching thousands of fireworks going off. It is a clear sunny day, yet the city is shrouded in a white fog of explosive smoke. All the streets are covered with red paper from the millions of spent fireworks. You have to see this to believe it!