CHINA TO LAOS BY CAR 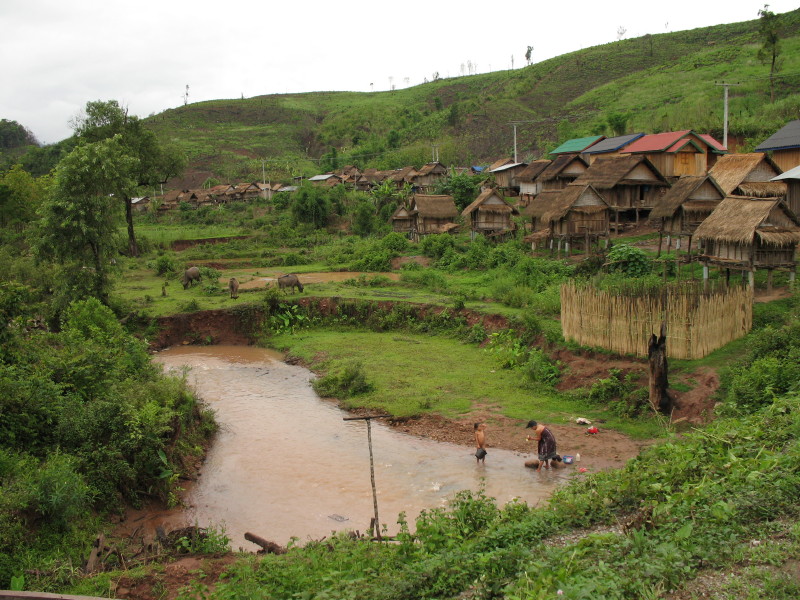 On May 1st I set out to travel from Kunming to a small town in Laos named Luang Prabang. For a little added adventure, I decided to drive my car there. After securing the necessary documents, I headed for Laos. The total distance round trip was 3072 km.

Driving through China is straightforward enough to Puer City, formally known as Se Ma. From there the G213 is still being built, so you detour to the old road all the way to the border. I stopped in Mong Na for the night which was about 60 km from the Laos border. The next morning I drove the last bit to the Chinese border and arrived there by 8am when they opened the border for crossing into Laos.

Entering into Laos is a story in itself. After spending 550Y and 4 hours of processing, I was free to travel on to Luang Prabang, some 600 km through the jungles and mountains. The small 2 lane road was barely fit for driving, averaging only 30 km at top speed. Driving in Laos was a dangerous business. Not long ago they changed the driving from the left side to the right side of the road. I suppose it didn’t really matter since the traffic just used whatever parts of the road that were not broken. Every few km I was going through some small mountain village dodging farm animals, children, carts, and broken down trucks. By 10:30 pm I finally arrived in Luang Prabang.

Luang Prabang is the ancient capitol of Laos. It is also the Buddhist religious center made up of many temples. They are scattered about this tiny town on almost every block. Situated on the Mekong river where the Kahn river flows into the Mekong, Luang Prabang is a picturesque town. Most of the buildings are of French design, the hotels mostly converted from the old French buildings. Restaurants, craft shops, and street markets make up the majority of the businesses here. It is certainly a tourist town. The food is fabulous and not expensive. The same can’t be said for the local souvenirs. You know somethings up when the prices for things are marked in US dollars instead of Lao kip. This region is famous for their amazing textile, handmade papers, and snake whiskey. But to me the best product of Laos is the “Beer Lao”. It has to be the best beer in Asia. And nothing is better than drinking an ice cold beer sitting by the Mekong river while it’s pushing 40C outside. The big bottle goes for 80 cents a bottle. The 5% alcohol content of Beer Lao packs a punch after a few bottles. Since it’s best not to drink on an empty stomach, I ordered up some local Lao food. Very similar to Thai food, spicy, hot, fresh and delicious. Fish, vegetables, noodles, beef and well..best not to ask, but it’s all good. There are restaurants here for every taste. Certainly the best restaurant in town is the L’ Elephant. Classic French cuisine cooked to perfection. Expensive, but well worth the average $6 for a complete dinner. When you consider that other restaurants are running half the price, L’Elephant is expensive. I hosted a dinner for 6 people, including appetizers, French wine and dessert. My bill was $69. And one person even ordered a second dinner plate. The hotels here are also very cheap. Do not use the internet anywhere for booking here! It is 50% less to walk in directly to the hotel for your room. Strange as it seems, this is a fact here. My room cost $20 a night which was advertised on the internet at $59!

The Lao people are warm, friendly people. I will even say that they are nicer than Thai’s overall. How’s that for nice! On more than one occasion, tuk tuk drivers wanted to take me around, and I would say no. His reaction was “Thank you sir, please enjoy your visit here.” Nobody seemed pushy about selling things, and people were just laid back. The only caveat to this is any “official” like, say, police. From my border experience and also in Prabang, they are all on the take; corrupt and rude ass%#@$. Must be the nature of the government. This is too bad, as it really puts a dampener on your first impressions of Laos. My border experience can be read in the Lonely Planet on-line, as well as the Trip Adviser. As for my local police encounter, let me explain here.

My hotel is located on a one way street and I had to park my car beside the hotel in the only spot for one car as most travelers only arrive by taxi. The next morning, I backed out into the street so I could drive down to a coffee shop. A military dressed dude, seeing me back out, decided that my reverse direction of 2 meters onto the street, constituted a “wrong way” drive. He made me stop in the street and produce my papers. Then he wrote on a piece of paper the number 500,000 and gestured me to pay him now. That’s $50 and about a year’s salary for a Lao! What a scumbag! Not only was this in no way legal, the money would only go into his pocket anyway. Luckily the hotel manager who spoke English came outside and started talking to this idiot. My problem is I know they would like nothing better than to throw me into a gulag, so I really had no choice in the end. But the hotel guy took me aside and told me just give him 50,000 ($5) and drive away. So I gave him the money, which he just put in his pocket, and I got in my car and left. Remember in Laos you are in hardcore commie country. That’s a chance you take visiting Laos. I was told that the “police” in Laos can and do come into your hotel room late at night to search you and see if you are up to no good. I’ve heard this from more than one source. Drugs of all kinds are legal and readily available all over Laos. In fact many times opium is used in the restaurants and bars, added to food and drink. Menu items with the word “Special” usually denote such drugged items. If a foreigner is found with drugs, the rules change. You will be in very big trouble. Also it is forbidden to have any relations with a Lao national. If you take a Lao girl to your hotel, it will result in a long jail sentence, or an extended vacation, however you want to look at it.

All in all Laos is a beautiful country to visit. I will probably return for another visit in the distant future, but flying in is the best way to go. I believe traveling by ground is still too risky and dangerous. I passed several tour buses broken down on the middle of nowhere; god knows what they do to get the tourists back to their destinations.