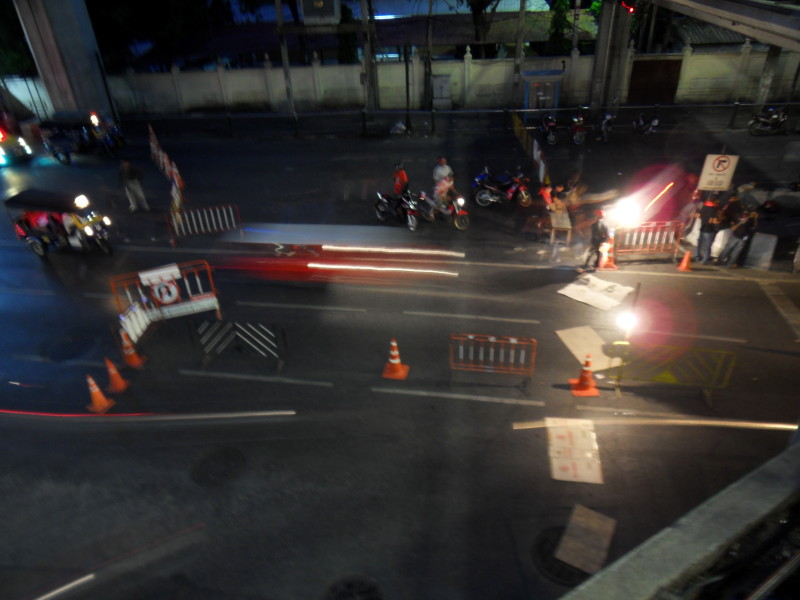 I have just returned from Bangkok after spending the past week there. As you all know, I travel to Thailand quite regularly. This trip was certainly a lot different to most with the government overthrow reaching it’s apex of violence in downtown Bangkok.
While I have a fair understanding of what is going on, it is regreattable PM Abhisit is incapalble of directing his govt to ending this conflict.  The lives of 21 people killed on Saturday lies squarely on his hands. From a visitor’s view, I can strongly recommend that you avoid travel to Thailand now and probably in the long term.  I never felt any personal danger from either the red shirts or the govt forces. They are doing their best to leave “citizens” alone. Having said that, this does not alter the fact that this conflict impacts your ability to do anything in Bangkok. The danger lies in finding yourself in the middle of one of their violent instances. The red shirts move around the city to different locations, so this violence is not limited to any particular area.
From my experience this past week, Thailand is a total waste of time and money now.  Most everything is closed. Not only the major shopping centers, but many restaurants, bars, shops and public transportation. If you want to go anywhere, taxi drivers will not use meters and charge you 2 to 3 times more for a fare. On top of which, they won’t even take you to many places as they have to avoid the red shirt zones which are all in the places you want to go anyway.
The personal dangers are very real. I had taken the BTS skytrain across the city to go to the Emporuim shopping center on Saturday morning. When I left there and came back outside, the BTS was shut down, stranding me a long way from anywhere. All the taxis were off, so no way to get anywhere but just stand around in the sweltering heat. Finally,  I paid blood money to a motocycle driver to take me over to MBK center.  I got there not knowing I was now within 1 block of the fighting. My first clue was seeing  people around  bashed up and bleeding. I ran over the the Asia Hotel and ducked inside the lobby to regroup and figure out the best escape plan. My point is you can get killed or injured easily  just getting caught in the middle of a skirmish. All around me were police laying around doing nothing while military troops were fighting a few blocks away. I had no clue and could have easily walked into the middle of it all by mistake. The police should have at least been blocking and warning people not to go that way. They had no function but to sit in the shade and play with their phones or sleep, a favorite pastime of Thai people.
For this first time in years, the Songram water festival is cancelled. The people here are NOT smiling. Thailand is no longer the “Land of Smiles”.
If this were to all end today, Thailand will not return to normal for a long time to come. My advice would be to spend your travel money elsewhere for the next year or so. There are plenty of alternatives, Malaysia, Viet Nam, Cambodia, Indonisia just to name a few. Thailand is broken……. get over it.