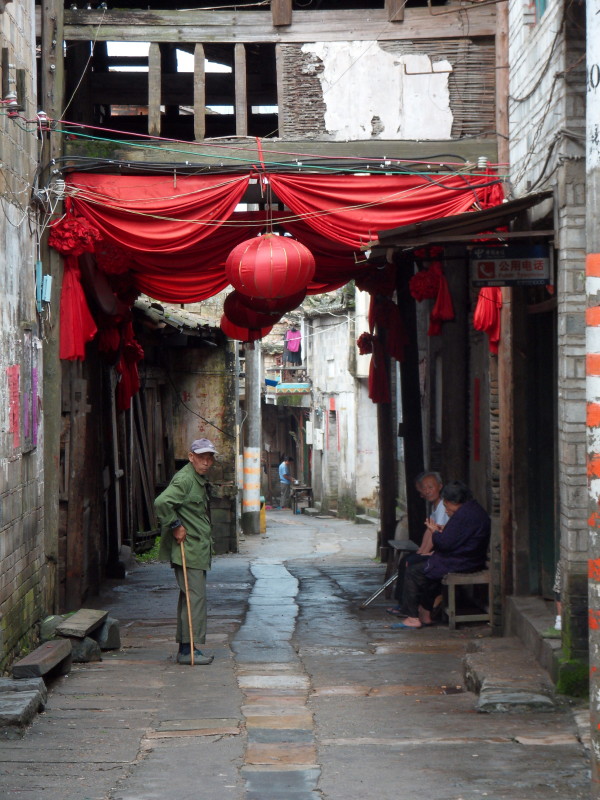 1 hour flight out of Shenzhen brings you to Wuyishan City, Fujian Province. Famous for its natural conservation of a large number of ancient plant species, wild animals and reptiles, many of which are peculiar to China.The Bohea and the Oolong teas are grown in this region as well. Unforunatly for us southern China has been hit by continuous heavy rain so that some attractions and scenic areas are not available to tour or access.

Wuyishan Scenic Area, once trapped thousands of tourists, is now closed temporarily. So we head off about 1 hours drive to the village of He Ping. He Ping itself is one of the oldest communities in northern Fujian. While other towns its age or older have been partially restored, this town has remained basically untouched. The town dates from the Tang Dynasty (AD618-907) when it was a simple rice farming town. The name Heping is made up of two Chinese characters which mean ‘Rice Plain’. The village itself dates well beyond that. One of Chinas oldest Classical Learning Academy’s was first opened in Heping in AD926 during the Tang Dynasty by government official named Huang Qiao. Walking around here is like a trip back in time.Because of the weather, it was empty except for a few villagers. I enjoyed being the sole visiter here in this quiet village. You can almost imagine living in another time.

After a few days we returned to Shenzhen for a look see. We booked into the Shangri-La Hotel. Truly a world class operation. One of the pics show a TV shot. In the room I saw my old friend General Li on the national TV channel. How cool!
The weather being so wet, our time was spent doing a little shopping. And what is Shenzhen famous for? Clothes and electronics. In fact it is the largest electronics shopping center in Asia. Hong Kong gets all it’s products from here! This is home to the Apple iPhone. In fact, most everything is made here. There is a street downtown lined with mega malls that are nothing but computer, phones, and anything electronic. I bought a few things that you can preview in the pictures and also on my gadgets page. Prices for clothes and electronics are extremely low. I was in heaven.

Shenzhen is a new modern city 30 minutes from Hong Kong. What was a tiny fishing village on the border of Hong Kong in 1970 is now a buzzing metropolis of over eight million people! Already containing 20 buildings at over 200 meters tall, including the Shun Hing Square (the 8th tallest building in the world). A 2010 study conducted by Forbes magazine ranks Shenzhen’s population density as the 5th highest in the world. In 2006, the Dapeng Peninsula, the location of Shenzhen’s best beaches, was nominated by the China National Geographic Magazine as one of the most beautiful coastlines in China. We plan to return in the near future for a closer look at this city and make a jump into Maccau as well.

Finally we spent a few nights in Guanzhou. I didn’t care for this city. It is huge, noisy, and dirty. Besides great food and the tallest TV tower in the world, I can’t say much about this place. I reconize it does hold an historical value, but frankly I didn’t see much reason to spend any time here. Still, the Chinchilla for sale there was cute…..