I wanted to add a page to my blog and showcase a person who has been a major influence on my life and helped me to find my new life in China. Without my spirit of adventure I got from my dad, no doubt I would never come to know this country.

Therefore, I wanted to post a page to tell readers what I think sums up my life experience, and gave me the courage and confidence to actually leave my comfort zone and commit to a totally different lifestyle. Maybe this will help others who can’t get past the dream stage.

Most important, this person that gave me this spirit deserves a place in my blog. So without further delay, I introduce you to Lt. Col ( ret) Harold Hendler, my dad. Born in Brooklyn New York, NY Sept 26,1922, 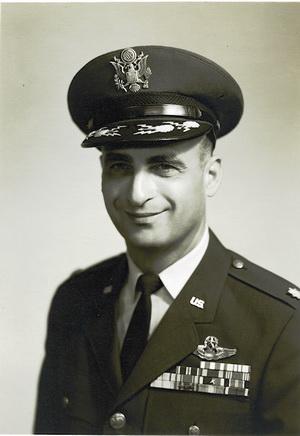 and raised in upstate NY. He joined the Air Force to become a pilot, and further his university studies. In 1946 he simultaneously received two civil engineering degrees from Lehigh University.

He married my mom in 1946, picture of him proposing to her!
This is where I came in, being born in Allentown PA into the military family life. Shortly after, we moved to Fairbanks Alaska before it was even a state. My dad’s job was to fly around mapping and surveying Alaska. Particularly in Fairbanks and Anchorage. You can look up in the city’s records and see his name as chief surveyor, even naming many of the streets of these cities. During his work, he often had me come along in his little piper cub airplane, where we flew to remote locations of Alaska. I still have my certificate of flying around the Arctic Circle.

The coming years of my life found me living in many places around the US, Europe, and the UK. Moving and starting life over for me was a regular event, like many “army brats”. It becomes routine for me to make friends fast and be ready to move on and leave it all behind again and again. I think this is where I always felt the desire to try something new, moving in my later years from US city to city. I suppose in the end I would call Seattle my home, since I lived the longest period of my live there.

Obviously the advantages and disadvantages of this lifestyle are numerous. Still, all in all I feel quite blessed to have grown up this way.

Anyway, back to my dad, he led quite an adventure himself in his career, which he could write a book about, but never sat down to write his own story thus far. He has been featured in a few books, (“I Always Wanted to Fly” and “German Boy” by Colonel Wolfgang W.E. Samuel “). 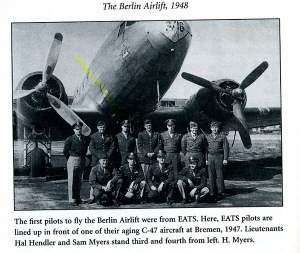 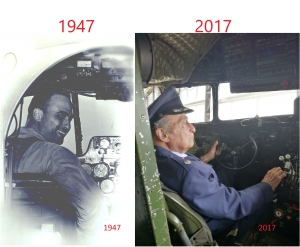 I should like to mention a few highlights. He was the first pilot/aircraft to land at Templehof for “Operation Vittles”, more commonly known as the Berlin Airlift. I remember watching the newsreels in high school of him standing in the cargo door of his C47, receiving the key to the city. Was I ever surprised to see my dad, with hair, in a history newsreel! In 2004, Berlin held the 50th reunion for the surviving pilots of the Berlin Airlift. It was a fantastic week long affair, which I attended with my dad. I got to experience something that will stay with me for my life. I want to extend my gratitude to the Lyons Air Museum, Irving CA for arranging my dad to get back inside of their C-47 for taking this picture.

A notable highlight was the opening or the Berlin Airlift Museum in Berlin, next to Templehof Airport. The city wanted to open it with the Airlift survivors in attendance. A unique feature of this building is a C47 aircraft that sits on top of the building. The C47 aircraft they used was my dad’s airplane! He still has his flight log book with his plane number. How cool is that? 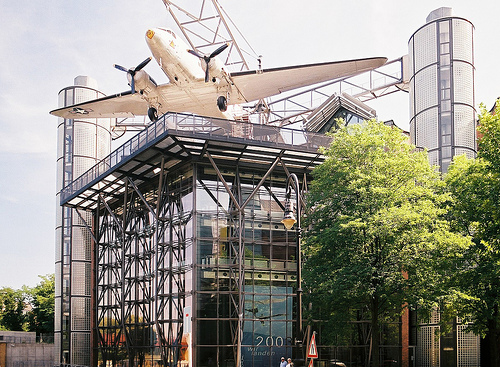 During Viet Nam, he flew the new Hercules 130’s. Quite a few were crashing on takeoff, but there wasn’t enough left of the planes to figure out what was going wrong. It happened to my dad, but he was able to save the plane, which led to the discovery that some engines were shifting into reverse thrust. He was an outstanding pilot which quick thinking had saved him and the plane from disaster. In the end, the planes were modified and this issue resolved.

While researching my Dad’s document I found he was the pilot who flew the UN delegation of 1949 in Palestine to negotiate the 1949 treaty. He flew Dr. Ralph Bunche who was the UN’s chief mediator, and diplomat who received the 1950 Nobel Peace Prize for his achieving the 1949 Armistice Agreement.

After a long military service as a pilot and flight instructor in the Air Force, he retired and eventually settled in Riverside CA. He is now in his ninety’s, but kept flying into his late eighty’s. In fact he has yearly passed his military medical exams to retain his military flying status until 85 years old! That is quite a feat in itself.

I remember flying with him out of Craig AFB, riding in the back seat of his T-33 jet. We would fly from Alabama to Maine and buy fresh live lobsters for dinner. It would take a few hours total, me in back with a bucket of snapping lobsters between my legs. It became real interesting after he would roll us upside down. The lobsters were not happy.

January 17th,2020 my Dad passed away. He lived his life with no regrets.

So now the conclusion of all this is I now live a great life in China, far away from the bs that has all but destroyed the American way of life. In China I enjoy freedoms the US has lost years ago. Things you take for granted in America don’t exist here. Crime almost non existent, except for petty crime like pickpocket or burglary. Start a business, build a house, etc does not involve thousands of dollars in license, inspection, environmental impact statements, regulations, restrictions, etc to deal with. People leave you alone and don’t care what you do. Going out anytime or anywhere is safe. Americans are well liked by Chinese contrary to what the US govt would have you believe. Cost of living is less than half of the US. No Tsa, no terrorists, no wars and amazing beautiful country to explore. Just browse through my gallery and see for yourself.

It is natural for you to stay into the comfort zone, for better or worse. Most people dream of a better life for them and their family, but can’t get the courage to pull the trigger. Those that do, and I met many here, all say they should have done it years ago. I know I have no regrets myself. Lucky for me I am retired, but most expats are working folks with families. There are professional job positions available in China that pay better than the US. Job benefits offered that far exceed companies in the US. If you are an airline pilot, China is paying double what they pay in the US. After a few years with a company, they will even throw in a villa for you as a bonus.

Generally, in this day and age, expat life exceeds US lifestyle wherever you go. Do your homework and research where you have interest. It is easy to do on the net. Not so easy for me when I did it 6 years ago. I was just a typical middle income worker in the US. Every month concerned about the bills and praying for no surprises month to month. I didn’t have a mass bankroll to do this. You just need to make a plan, research the options, and get off the sofa. Once you begin, it turns out it is not as hard as you thought. The mind has a nasty way of controlling you, especially about the unknown. I hope all I accomplish from this article is to get you to realize there is a better life waiting for you if you are not happy, secure, and living stress free, the way life is supposed to be.

Here are a few more pictures of my dad. 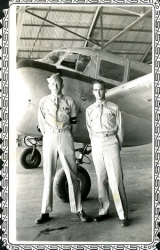 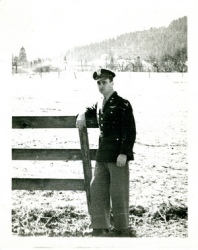 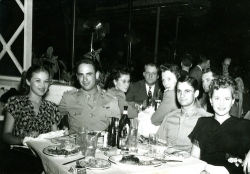